The long-term valuation of the market is commonly measured by the Cyclically Adjusted Price to Earnings ratio, or “CAPE”, which smooths-out shorter-term earnings swings in order to get a longer-term assessment of market valuation.  A CAPE level of 30 is considered to be the upper end of the normal range, and the level at which further PE-ratio expansion comes to a halt (meaning that further increases in market prices only occur as a general response to earnings increases, instead of rising “just because”).   The market was recently at that level.

Of course, a “mania” could come along and drive prices higher - much higher, even - and for some years to come. Manias occur when valuation no longer seems to matter, and caution is thrown completely to the wind - as buyers rush in to buy first, and ask questions later. Two manias in the last century - the “Roaring Twenties” of the 1920s, and the “Tech Bubble” of the late 1990s - show that the sky is the limit when common sense is overcome by a blind desire to buy. But, of course, the piper must be paid, and the following decade or two were spent in Secular Bear Markets, giving most or all of the mania-gains back.

Note:  We do not use CAPE as an official input into our methods.  However, if history is any guide - and history is typically ‘some’ kind of guide - it’s always good to simply know where we are on the historic continuum, where that may lead, and what sort of expectations one may wish to hold in order to craft an investment strategy that works in any market ‘season’ … whether current one, or one that may be ‘coming soon’!

As a reading of our Bull-Bear Indicator for U.S. Equities (comparative measurements over a rolling one-year timeframe), we remain in Cyclical Bull territory.

Counting-up of the number of all our indicators that are ‘Up’ for U.S. Equities (see Fig. 3), the current tally is that four of four are Positive, representing a multitude of timeframes (two that can be solely days/weeks, or months+ at a time; another, a quarter at a time; and lastly, the {typically} years-long reading, that being the Cyclical Bull or Bear status).

U.S. Markets: The major U.S. equity benchmarks rebounded from the previous week’s steep losses, helped by plans for a new fiscal stimulus and improving vaccine distribution.  The large-cap S&P 500, Nasdaq Composite, and small-cap Russell 2000 indexes all reached record highs.  The Dow Jones Industrial Average soared over 1100 points finishing the week at 31,138, a gain of 3.9%.  The technology-heavy NASDAQ surged 6% to 13,856.  By market cap, the large cap S&P 500 added 4.6%, while the mid cap S&P 400 and small cap Russell 2000 rallied 5.8% and 7.7%, respectively.

Commodities: Precious metals were mixed last week.  Gold retreated for a second week, declining -2% to $1813.00 per ounce.  After hitting a high of over $30 per ounce, Silver settled to close at $27.02, a gain of 0.4%.  The big gainer among commodities was oil, surged almost 9% on renewed hopes that vaccination efforts would lead to a full reopening of the U.S. economy in the near future.  West Texas Intermediate crude oil finished the week up $4.65 to close at $56.85 per barrel.  Copper, viewed by some analysts as a barometer of world economic health due to its wide variety of industrial uses, retraced last week’s decline finishing up 1.97%.

U.S. Economic News: The U.S. added just 49,000 jobs in January as the U.S. struggles to recover from a resurgence of coronavirus cases at the end of last year.  The reading was in line with the consensus forecast of 50,000 new jobs.   There were notable gains in professional and business services (97,000 jobs created, but nearly all were temporary help).  Private education, wholesale trade, and mining also added jobs.  However, leisure and hospitality, retail trade, health care, and transportation and warehousing all lost jobs.  The unemployment rate tumbled to 6.3% from 6.7%, below expectations of an unchanged reading, but that decline was for the wrong reason: people abandoning job searches and thereby dropping out of the labor force.  Economists say the true level of joblessness is several points higher.  Curt Long, chief economist at the National Association of Federally-Insured Credit Unions stated, “There is still a long road ahead to full employment, and the case for fiscal stimulus got a bit stronger.”

The number of Americans filing first-time claims for unemployment benefits fell to a nine-week low last week, suggesting hiring is slowly beginning to pick up again.  The Labor Department reported initial jobless claims declined by 33,000 last week to 779,000.  Economists had forecast claims to total 830,000.  It was the third consecutive decline and a hopeful sign that layoffs have begun to taper amid more vaccinations and a rollover in the COVID curve.  Continuing claims, which counts the number of Americans already receiving benefits, fell by 193,000 to 4.592 million.  That number is reported with a one-week delay.

Activity among the nation’s manufacturers pulled back but still remained strong.  The Institute for Supply Management (ISM) reported its manufacturing index fell 1.8 points in January to 58.7.  Economists had expected a reading of 60.0.  Still, it was only the second pullback in the index since last April and the index remains close to its highest level since November 2018.  Of the 18 industries tracked by ISM, 16 reported growth.   Analysts note the breadth of the expansion supports continued gains in manufacturing output.  The pullback was led by slower growth in new orders and production.  A separate survey from the Markit organization reported its U.S. Manufacturing Purchasing Managers’ Index (PMI) increased 2.1 points to 59.2—a record high.  In contrast with the ISM report, the Markit survey indicated faster growth in output and new orders.

The much larger services side of the U.S. economy started the new year on a positive note, as well, according to ISM.   ISM reported its non-manufacturing index (NMI) increased 1.0 point to 58.7.  Economists were expecting a -0.7 point pullback to 57.0.  The reading was its highest since February 2019.  The latest reading is consistent with above-trend economic expansion.   While survey respondents noted that various COVID restrictions continue to weigh on activity, they also expressed optimism about business conditions and the economic recovery.  Of the 18 industries in the survey, 14 registered growth and four contracted.  The net number indicates a broad-based expansion and is consistent with continued growth.  Separately, the Markit Services PMI rebounded 3.6 points in January to 58.3, its second-best level since March 2015.

International Economic News: Canada’s economy shed over 213,000 jobs in January as lockdowns forced more businesses to close their doors across the country.  Statistics Canada reported the jobless rate ticked up 0.6% to 9.4%.  That’s the highest level since August.  January’s decline means that Canada now has 858,000 fewer jobs than it did in February of last year—just before the coronavirus crisis began.  The reading was far higher than the 40,000 economists had expected.  Almost all of the job losses came from Ontario and Quebec, which lost a combined 251,000 jobs — mostly in retail, accommodation and food services.  That plunge was offset by slight job gains in Alberta, Manitoba, Nova Scotia and Prince Edward Island, while the jobs number held steady in British Columbia, Saskatchewan and New Brunswick.

Across the Atlantic, the Bank of England expects the United Kingdom’s economy will “recover rapidly” as vaccines are rolled out this year.  The bank expects GDP to shrink by around 4% in the first quarter as a result of the latest lockdown measures.  However, its latest monetary policy report suggests a brighter outlook for much of the rest of the year.  "GDP is projected to recover rapidly towards pre-COVID levels over 2021, as the vaccination program is assumed to lead to an easing of COVID-related restrictions and people's health concerns," it said.  For 2022, the Bank predicts growth of 7.25%, up from a previously forecast 6.25%.

On Europe’s mainland, French Prime Minister Jean Castex rejected calls for a third lockdown because the “economic, social and human costs can’t be justified”.  During a press conference, Castex said stabilizing new infection rates and an impending vaccine roll-out means the government can hold off from imposing new nationwide measures.  France's daily infection rate is just marginally lower than the UK's with the country reporting 316.47 cases of Covid per million people compared to Britain's 331.09.   Castex said another lockdown could only be enacted “as a last resort”.  “The situation today does not justify such a move,” he added.

Germany’s governing parties have agreed on more help for families with children and people on benefits, as well as tax help for companies, as they try to keep Europe’s biggest economy on course to grow out of the pandemic.  Leaders of Chancellor Angela Merkel’s governing coalition agreed to give a one-time 150-euro ($180) bonus to families that receive child benefit, following a 300-euro bonus last year.  There also will be a 150-euro payment for people on welfare benefits.  Restaurants, cafes and bars have been closed, except for take-outs and deliveries since early November as part of a lockdown that was expanded in mid-December and is still in force.  Merkel and state governors will confer next week to decide what, if any, restrictions can be loosened.

In Asia, China’s growth is expected to moderate in the coming months as the country faces risks on two fronts according to Goldman Sachs chief economist Andrew Tilton.  China is expected to show “spectacular” gross domestic product numbers in the first quarter of the year, Tilton said.   That growth may lead Chinese policymakers to pull back on economic stimulus.  Furthermore, China is experiencing a resurgence of local coronavirus outbreaks.  Chinese authorities have recently imposed new restrictions in an effort to suppress a series of outbreaks in and around Beijing.  Ultimately, Tilton expects the Chinese economy to stay in the relatively “happy middle of these two scenarios” over the next six to nine months.  “But I think markets will probably worry at times about one or both of those,” he noted.

Unable to rein in a third wave of coronavirus infections after a month-long state of emergency, Japan announced it is the extending the emergency for another month.  The move comes despite the mounting toll on the economy and poses a threat of impacting the country’s Summer Olympics preparations.  Japanese Prime Minister Yoshihide Suga told Parliament that thanks to the current state of emergency “the number of new COVID-19 patients nationwide is heading downward.”  “But we need to continue this trend,” he added.  The state of emergency requests residents to cut unnecessary outings and businesses to shorten hours.

Finally: Individual investors are entering the market in droves and their newfound passion for options is making some market veterans nervous.   Garrett DeSimone, head of quantitative research at OptionMetrics stated, “What we have seen is a focus on short-term, out-of-the-money call options because they have these lottery-like payoffs.”   Buying deeply out-of-the-money calls is usually a losing proposition.  But some of those bets have paid off in dramatic fashion, with the buyers posting their gains on sites such as Reddit, Twitter and Instagram.   Average daily call volumes over the past three months have hit a new peak, with the bulk of the increase driven by “very small” contract sizes, according to analysts at Deutsche Bank.   A combination of YOLO (You Only Live Once – the battle cry of many on reddit’s wallstreetbets forum), and FOMO (Fear of Missing Out – a powerful motivator in its own right) seem to be the ingredients of this powerful cocktail of market froth. The chart below, from Deutsche Bank, shows that “Small traders” overtook all others in April of last year, and never looked back.  By January of this year, there were twice as many “small trader” bullish options contracts outstanding compared to the other categories. 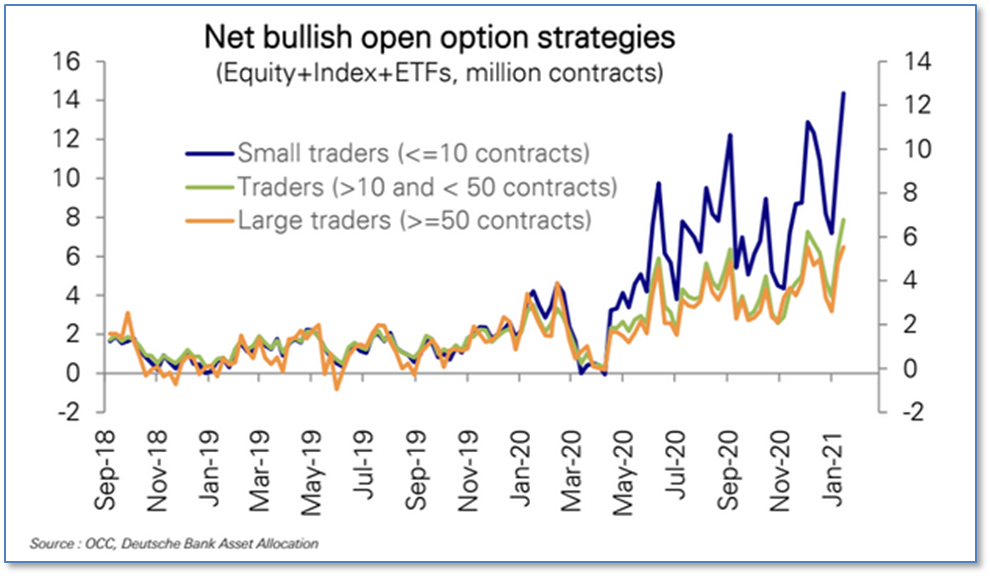 The Very Big Picture: 120 Years of Secular Bulls and Bears 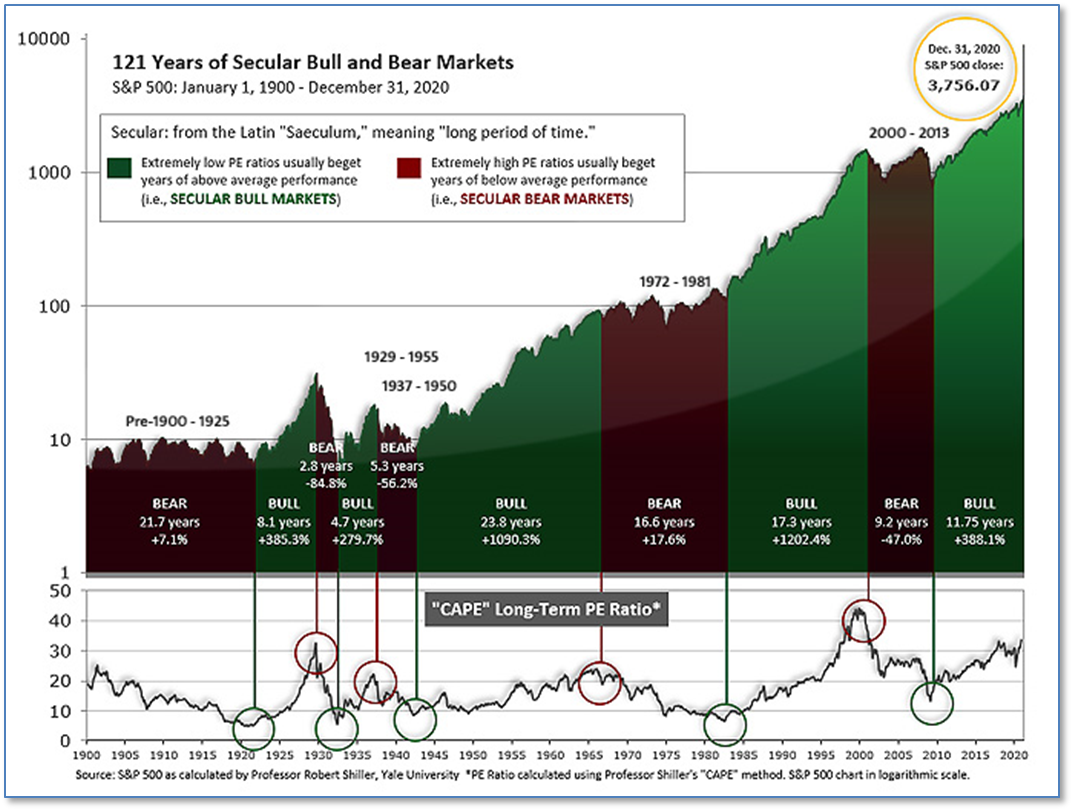 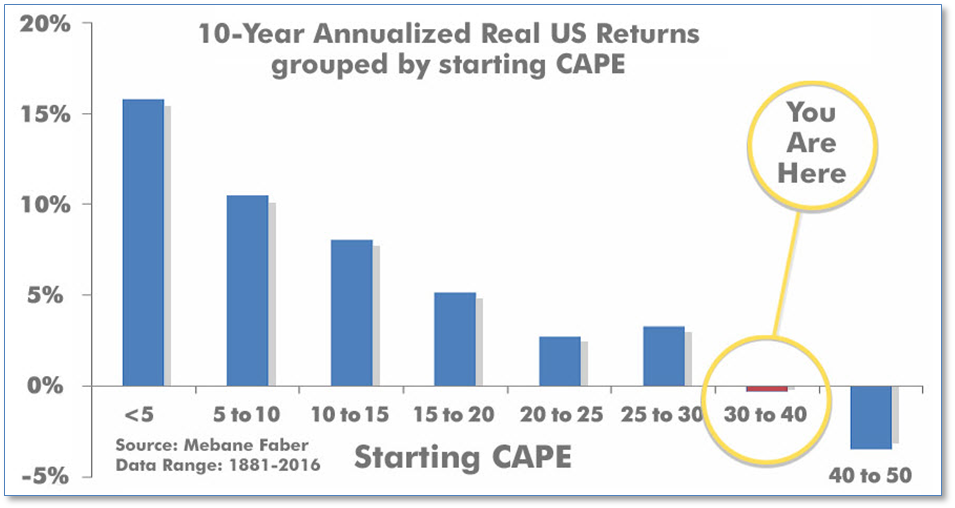 The Current ‘Complete Picture’: The Sum of Positive Indicators.

(Graphics for use on either light or dark email or website backgrounds.)